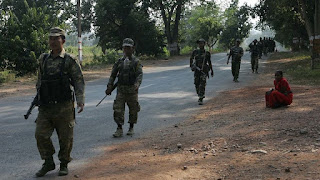 Few days ago armed Maoists attacked CRPF patrol party in Sukma in Chhattisgadh killing 25 troops. Later they mutilated bodies of martyred soldiers. There is extreme outrage in the people of India about the attack and lives lost in it.
While reading the newspaper, we have came across the new report in various newspapers like, Hindustan Times, Economic Times, Outlook and DNA which has published Maoists Propaganda Press Release in the name of Vikalp, Spokesperson of CPI (Maoist) Dandakaranya Special Zonal Committee- CPIM-DSZC, as per all these news outlets, it is "Unverified Audio Clip", the excerpts of that audio clip reads that, "Sukma ambush was in response to gang-rapes, murders by security forces"
After reading the excerpts of propaganda audio clip, Legal Rights Observatory- LRO came to the conclusion that,

1) Someone ( Read- Maoist and Naxalites) is playing foul game with Freedom of Press, which is amply available in India. And the news outlets knowing or unknowingly playing the role of Maoists Propaganda Machinery by broadcasting the message which is potentially harmful, solely targeted at harming morale of the security forces engaged in the Counter Insurgency Ops in Maoists infested area,
2) Every newspaper, which published the excerpts of CPIM-DSZC audio release mentioned that it is "Unverified" source, that means authenticity of the audio clip is questioned. In that case, when these newspapers were unaware of the authenticity of the audio release, for which good reason they published gist of that clip?
3) Was there any unseen motivation, allurement, ideological binding in publishing such "Unverified" audio press release?
4) Was that audio clip recorded in the news room instead of at CPIM-DSZC hideout to justify Maoist attack on troops and to question professionalism of the troops involved in the CI Ops?
As the questions and conclusions that propped up after reading transcripts of audio press release of CPIM-DSZC, Legal Rights Observatory- LRO, appeals Press Council of India to avoid repeat of such incidences, which are promoting Maoists cause under the guise of Freedom of Press and demands PCI, that,
1) PCI must seek clarification from all news outlets; print and digital about publishing excerpts of "Unverified Audio Clip",
2) PCi must formulate guidelines to avoid the incidences of our own media knowing or unknowingly playing role of Propaganda Machinery of Maoists harming National Security,
3) PCI shall issue advisory to all newspapers to take utmost precaution henceforth while publishing Press Releases issued by terror groups and underground outfits.
4) PCI must issue notices to all newspapers which has published excerpts of "Unverified Audio Clip" in the name of Freedom of Press.
5) Counter Terrorism force Assam Rifles which is dealing with insurgency in NE India had issued orders to 5 newspapers of Nagaland on October 25, 2015 prohibiting them from publishing Press Releases of insurgents in the state and playing as the part of PR machinery of the Ultras. So, if circumstances demands so, then there must be restrictions on Freedom of Press in broader national interests.

If, PCI fails to take corrective measures against these newspapers, then LRO will approach appropriate government department or Court of Law against these media outlets to stop malicious propaganda unleashed against troops involved in CI Ops.